By my calculations, there are upwards of a metric bunch of restaurants called Bar Italia around the world. But my absolute favourite, and without doubt the only one ever I’ve been to, is Bar Italia. That place is great. It’s in the Sydney suburb of Leichhardt, which despite being named after an explorer from Prussia (one of those pre-Internet countries) who got lost and was never seen again, is now home to Sydney’s Italian population. And my brother Tim. Tim doesn’t keep coffee around the house due to repeated violent run ins with the French press, so when in Sydney, my day starts at Bar Italia. It was a regular part of my life when I lived here, and then, as now, one coffee there is strong enough to keep me awake well into the afternoon.

Legal stimulants taken care of, I had a bit of time to kill between gigs, so one day took a stroll through my old stomping ground, the Inner West. When I was a kid it was unfashionable and grotty, but it’s now one of Sydney’s most outrageously expensive areas, where locals look down their noses at blow-ins like me. I paused outside the various hovels I once called home, peered in the windows and rifled through the mailboxes. My only goal that day was to eat a meat pie (it’s as close to a national dish as we get), and drink a beer, which I achieved but not before being yelled at for taking photos of a pub (one in which I used to live, I should say), and being attacked by a large bird for, I assume, taking photos of its tree. Here’s a picture of the pie. A highlight. 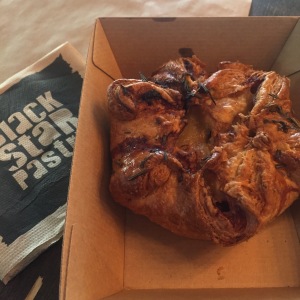 Then began three intense days of grueling toil which any mortal man would call “easy”. On Thursday, a rehearsal in which I displayed my lack of recent big band experience by not remembering any of the old jokes (“watch for my cue” “the near cue?” “no, the far cue”); followed by an hour blatantly lying about the quality of my own work on the radio; then a great night playing jazz at Foundry 616 (which, as I’m required by joke law to say, is far superior to the previous 615 Foundries). I reunited with old mates Andrew Dickeson and Ashley Turner and we swung our way through two sets of favourites in front of an appreciative crowd, some of whom I wasn’t even related to!

On Friday Andrew, Ashley, and I, along with ace guitarist Carl Dewhurst stumbled into Electric Avenue studios to put down an album the old school analogue way: direct to tape. This produces a beautiful warm sound, but unlike digital recording, means there’s no editing, and therefore no mistakes. I made lots of mistakes. We were there for ten hours, but I think we got a pretty good record. I followed this by letting my folks buy the Peking Duck I’d been denied in Peking, and it was bloody delicious.

Sunday was Manly Jazz Festival day. I rode the ferry across Sydney harbour (which I maintain is one of the loveliest experiences available anywhere), and played a quartet set with Sydney trumpet legend Warwick Alder, to a lively crowd that for the whole hour remained actively engaged and intensely focused on their fish and chips. Then a couple of big band sets in which I fumbled my way through the second alto book and tried not to be noticed; interspersed with stretches on the beach, and much longer stretches at the front bar of the Steyne hotel. 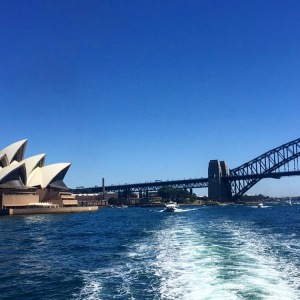 Monday was my last day in town, and a day off, so Tim and I went back to Manly to soak up the last of the atmosphere. It’s a small but charming and well organized festival in a beautiful location, and its egalitarian approach welcomes all comers, not just beret’d jazz nerds. The night finished with a rowdy and good natured jam session where I did my darnedest on a few tunes with saxophonists Andrew Speight and Eric Alexander. I bid the cats farewell over a couple of quiet beers, and headed home to pack for New Zealand. About which I’ll tell you in a few days…

One thought on “Stimulants, Attack Birds, and a Lovely Pie: Sydney”