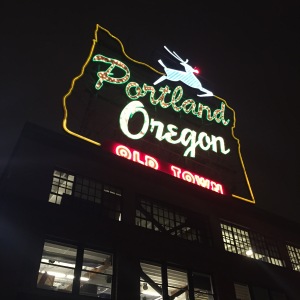 I’m back, safe and sound with the muggers and drug dealers in NYC. My people. The last leg of our little NW adventure took place in charming Portland. It’s rare on a tour like this to spend a few days in one town, but that’s how it worked out, and I was well pleased. I reintroduced myself to the town in usual Hempton fashion; by schlepping my gear for miles. But there are few more schlep-friendly towns around- well maintained sidewalks, no hills to speak of, and an almost complete absence of people. It’s a quiet joint. The walk took me across the delightful Willamette river to the colourful East Side.

If you want to relive the cross-country car trips you took as a kid with your family in the 70s, I recommend booking a night at the Eastside Inn. I had three. It’s got all the hallmarks of a classic old-timey motel: dusty, airless lobby attended by moth-eaten owner; three floors of squat rooms with wraparound balconies designed in the maximum-security-prison style; a strip club across the street (Union Jacks…); mysterious banging noises; and an unsurpassed level of throat-clutching mustiness. Seriously, when I opened that door I was hit by an acrid wave; it was like discovering the chamber where an Egyptian Pharaoh kept his grandmother’s bedsheets. A bit like this:

I kept the doors and windows open day and night, but this stuff lived there. After three days in that room, my suit became the season’s have-must item!

On the Sunday night, we headed south to the town of Aurora, and the Aurora Colony Vineyard. Oregon is known for its wineries, and one of these days, a vineyard jazz tour is in order. I was joined by some top-notch Portland players, and we played in the vineyard’s tasting room to a select (read small) group of discerning patrons. A little gig like this, while not financially particularly rewarding, is still a great pleasure for its intimacy. The audience felt involved in the performance, and I felt involved in the wine tasting. Very involved, actually. They squeeze a mean Sauv Blanc, and our generous hosts laid on some top-flight grub (pear and blue-cheese pizza anyone?). Audience and band chatted after the show, and when we rolled out of there, we were all firm friends.

I had the next day off, and spent it on one of the classic Portland tourist activities: standing in line all freaking day at the bank. I had some Canadian cash to deposit, and when I finally reached my 12-year-old teller, he was not only unfamiliar with Canadian currency, I suspect he’d never heard of the country. We sorted it out, and after converting it at the current rate, I took my Vancouver gig money and bought a doughnut.

I tramped around town for the rest of the day, sampled from the countless food carts, got lost in the world’s biggest bookshop (if you lose your friend in a bookshop, can you have them paged?), and had dinner at a few of the city’s 65-odd breweries with a record company executive (it was actually my friend Nick from the Posi-Tone label…). Beer is a big thing in this town- they’ve got more breweries than any other city in the world- and you’ll often find yourself sitting in the shadow of the vat containing the beer you’re currently drinking. They go for the big hoppy varieties, subtle as a smack in the ear with a housebrick, and often a bit sweet for mine, but I’ll keep trying.

Tuesday we played at what was then called the Dahlia Theater in the lovely town of Canby, Oregon. Since I was originally booked for this show, the venue has been called Canby Wedding Chapel, Angelina’s Artiste Centre, and the Dahlia Theater. Who know’s what it’s called now. I can’t tell you what a joy it is to promote a show that changes its name every week. It’s actually a real Methodist chapel, built in 1884, with lovely ornate pressed tin walls. It’s a beautiful old pile, with naturally warm acoustics, and is now, thanks to owners Marilyn and Martin, exclusively used for concert presentations. Check this joint out!

Next morning, it was toodle-pip to the girls at Union Jacks, and a cab (driven by a local bass player- I talked all the way) to the airport. It was a great fun trip, and I’m looking forward to getting back there soon. Next week: bonkers in Honkers!

2 thoughts on “A Curse Unleashed; Working for Doughnuts; and a Dahlia by Any Other Name”