Note: this all happened ages ago. N

When we left each other last, I was dealing with my 40th birthday with calm, philosophical, zen-like acceptance. And four jugs of Illusion and a tattoo. This dubious landmark fell, as have so many before it, on New Year’s Day; and as this was a big one, my younger brother, exhibiting his trademark generosity and questionable judgment, threw me a barbecue. The barbie is a big part of Australian culture, but I can’t see much to separate it from backyard get-togethers anywhere else.

There’s lots of charred meat, usually a couple of forlorn, neglected salads, lots of beer, and talk about weather and sports. The only difference here was that the food was seriously top-shelf (cos my bro doesn’t fuck around once he’s strapped on the apron), and a lot of said food was kangaroo. If you’ve never eaten our national symbol, it’s lean and gamey and delicious. If you can find it, try it. As a rule, I dislike gatherings of more than one person, but this really was a lovely gang of people, and I grudgingly admit to enjoying myself. Although, after everyone left, I held a private birthday ceremony wherein I stripped naked, smeared myself with kangaroo fat and charcoal, climbed a tree and sang “It Was A Very Good Year” very quietly to myself, for several hours.

I used to play in big bands a lot when I lived in Sydney. I don’t get called for that kind of work much in New York, and I miss it. So I was well chuffed when my old boss Dan Barnett called me to sub in his band. Dan’s a great trombonist and vocalist, as well as a charismatic and entertaining bandleader, and his gigs are always top fun. Once a month for years he’s played at the Unity Hall Hotel in Balmain- one of those classic inner-city pubs that Sydney used to be known for. Recently the gig has moved next door, to the much more comfortable Workers’ Bar- a top little venue in the former home of one of the city’s first workers’ unions. It’s a friendly joint, decorated with kitschy reminders of its Labor party heritage, and this afternoon was packed with smiley folk downing beers and piling onto the dance floor. This is really one of the most fun gigs in Sydney, and if you’re in town on a Sunday, I heartily recommend it. Here’s some of Dan’s band in action at the Unity:

and if you want to find out about the band’s new album (recorded just a few weeks ago), you can check it out here: http://www.danbarnett.com.au

I filled in a few quiet days reintroducing m 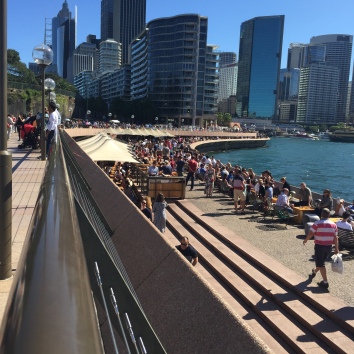 yself to various family members, eating meat pies, drinking beer, and being a tourist. I even went to look at the harbour. I felt like a bit of a schmuck- like a New Yorker going to Times Square- but I had to remind myself of its loveliness. It was idiotic of me to attempt this during the summer holidays- from the bridge, ‘round Circular Quay, to the Opera House it was elbow-to-arsehole sunburned shouty English tourists. I gazed serenely out across the water, dreaming of flinging a few of the whining buggers in, but eventually had to seek refuge in
the cool and beery Orient Hotel.

And suddenly it was my last night in town, and I had a gig! Legendary Sydney drummer Andrew Dickeson is one of my oldest mates, musical cohorts, and teachers; and he’d very kindly lined up a show at a relatively new club called Foundry 616. Run by renowned jazz impresario Peter Rechniewski, it’s a well appointed, well designed jazz club in the classic supper club style. The band was Dicko and me, with bassist and old mate Brendan Clarke, and guitarist Dave Blenkhorn- a Sydney lad now plying his very swinging trade in Europe. The joint was packed to the rafters with family and friends, which was initially terrifying, but ultimately heart-warming and somewhat overwhelming. It was a terrific hang, we played as much bebop as we possibly could, and as a salute to my Sydney salad days, I ended the night by skipping out on my bar tab. Sorry about that, Peter.

Here’s a tune from that very gig!

I managed to fit in another 24 hours in Hong Kong on my way home, where I attempted to eat this: 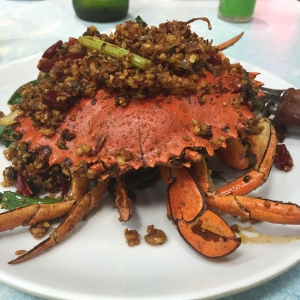 One thought on “Barbies, Big Bands, and Bolting from Bar Tabs: Sydney, Week 2”