The Catch and Release Experiment, as it was originally envisioned, has limped over the finish line, exhausted and disoriented, and is now curled up and panting in the nearest bar. It’s finished, and not a moment too soon. And depending on your perspective, it was either a roaring success, or a dismal, soul-crushing failure. Personally, I prefer not to dwell on the more than seven billion people who didn’t download the tracks; or the resounding lack of interest shown by jazz radio stations (aside from a few standout exceptions); and I really try not to think about how much hard-earned coin I’ve thrown at it… Instead, the Hempton Band’s Department of Selective Memory is insisting I focus on eight tracks of good music, some exciting musical collaborations, loads of great press, a devoted handful of satisfied customers, and a bold attempt at something new.

One thing has become clear over the past year. When we started this harebrained scheme, the race for supremacy in the music delivery business was between downloading and streaming; and they seemed about neck-and-neck. And it would seem, to persist with an overused metaphor, that my horse has taken a somewhat philosophical view of the race. Download numbers have dropped dramatically across the board, in all genres, while streaming services are gathering speed (and money) every day. And in just the last few months we’ve seen the launch of two big new streamers: Apple Music and Tidal (hahahahahaha!). And it makes sense: almost unlimited music for a small monthly fee. As soon as they sort out a way to compensate artists in a decent fashion, I’ll probably sign up myself. 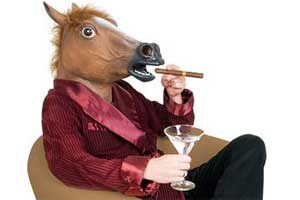 But all this aside, I’m now left with the questions of what to do with this music, and what to do with this blog. Firstly, I’ve decided to take a second run at the wall, and put the music out on CD. As I’ve mentioned before, a lot of radio stations are resistant to playing digital tracks, so if they won’t play the Catch and Release CD, it just means they don’t like the music. Fair enough too, but I reckon we’ll get some airplay- it’s all pretty radio-friendly stuff. Still the best place to sell music is at live shows, so this will give me a chance to hand over some of the new gear to folks who’ve enjoyed a gig (there are all sorts of gimmicky ways of selling digital tracks in person- download cards, little USB drives- but I’ve never seen anyone buy one.) And let’s not forget there are some weirdos who just like CDs.

So the plan is to remaster all the tracks (because they were recorded/mixed/mastered separately, they all sound a bit different, so we need to get a uniform tone for a CD), get some artwork done, write some liner notes, and have a release in November. This brings me to the blog.

This site was set up to have a finite existence (one year) but I’ve enjoyed scribbling my nonsense here, and don’t really feel like giving it up. So here’s the plan: I’ll describe goings-on related to, and leading up to, the release of the Catch and Release CD; but I’m also going to cast the net a bit wider, and have a natter about matters not directly related to the project- gigs, venues, musicians, etc.- all music-related and hopefully interesting.

So that’s it. I hope you’ll stay with me on this thing, and let me know- what kinds of things would you like to read about here?

4 thoughts on “What Now?? (Or, Breathing New Life into a Dead Horse)”