I was supposed to write this weeks ago. I was just back from an amazing time in Asia- 10 days of pop stardom in Hong Kong, followed by three days of gallivanting anonymously around Hanoi- and I thought you needed to read some more of my garbled disorganised travel stories. And then Bourdain went and died, and that really put me on the back foot. I’m not going to gush about him- people have been doing that ever since, and way better than I could. But I will say that the big guy was an important presence in my life- his attitudes to food and travel, the way he experienced other cultures, definitely informed my own approach. And he was never on my mind more than when traveling in Asia. So after two weeks of him peeking over my shoulder, silently judging my restaurant choices, the news of his death was a nasty jolt. I guess it would have been anyway. Fortunately his ideas are not going anywhere, and I’ll continue to heed his words when hitting the road. But enough of that- let’s get bonkers in Honkers.

The nice thing about this trip was that, after a half dozen visits to Hong Kong, I’ve seen a lot already. I didn’t feel that panic to get out and do, see, and eat, everything. I know where to go to get my roast goose fix; I’ve eaten my own weight in dumplings and noodles at the places the foodie websites told me about; I kinda feel like I’ve got a pretty good handle on the joint. And this time I had the parental unit in town for a few days, so I got to play the expert.

This was my fourth tour of duty with the Bianca Wu band (or the New York Jazz Cats as we’re officially titled- please don’t tell anyone). Bianca is a renowned pop singer in Hong Kong, and likes nothing better than to come to New York, record an album, then fly the whole 9-piece band down for a gig or two. Musically, it’s pretty far from what I usually do, and I can’t say I listen to much Cantonese pop in my downtime, but the band is ace, Bianca and her crew are lovely, and it’s fun to be a part of a big pop show playing to thousands of people. 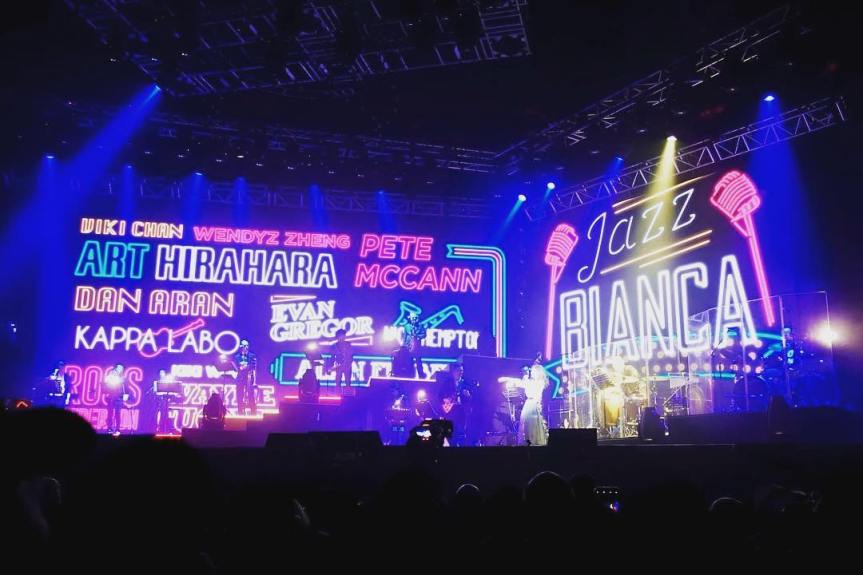 This was the biggest show to date, with dancers, light shows, giant video screens, a moving stage– lots of intricate parts to be connected, requiring an enormous amount of precision work done by a large group of very talented people. Fortunately none of this involved me. For real, sometimes it’s sweet being the sax guy. Honk my way through the half of the show with horn parts, rip out an occasional 8-bar smooth jazz solo, then take a seat and watch the dancers. My mates Art and Dan (piano and drums) carry most of the show while I sit back and try to look cool for the cameras. Life just ain’t fair. 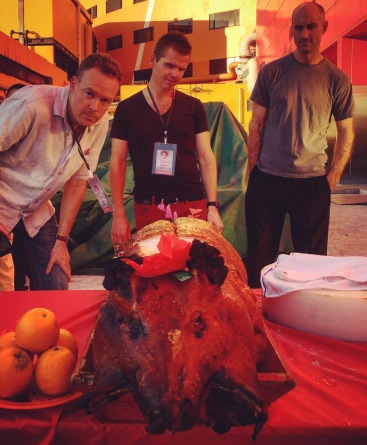 Before the first show, the entire outfit converged on the parking lot for a good luck ceremony. This involved our star Bianca and various associated bigwigs performing a complicated series of manoeuvres around some large smouldering incense sticks and sheets of burning paper. Nobody seemed able, or inclined, to explain to me what was going on, but I probably wouldn’t have paid much attention anyway, being occupied as I was in staring lasciviously at the ceremonial centrepiece: a glistening whole suckling pig. I dutifully did my bit- held some burning sticks, said some words I didn’t understand, all the while elbowing my way artfully through a group of people all considerably smaller than me, to be first in line for the blessed pork. A master carver hacked his way deftly through the porcine offering and handed me my dripping pile of ears, skin, and tongue. I scurried over to a corner and scoffed the lot, calm in the knowledge that least I didn’t have to worry about playing well: the fate of my performance was no longer in my own greasy hands, but in those of some Chinese deity. That night’s insipid smooth-jazz licks were positively divine.

At midnight one night after a particularly long, late rehearsal (Mum: haven’t you got it right yet??), Dan and I got back to the hotel starving. The helpful hotel staff suggested that the only things open would be around the train station. I’m not sure about you, but experience tells me food gets worse the closer it gets to public transport. But with little choice, we set off. And sure enough, once we crossed the tracks, we entered a magical make-believe world of kickass 24-hour restaurants. We walked along a winding, bustling street with noodle joints, dumpling spots, roast meat emporia, each more tempting that the last, and all open and overflowing with happy, partying locals. Of course we decided food could wait and headed for a bar. 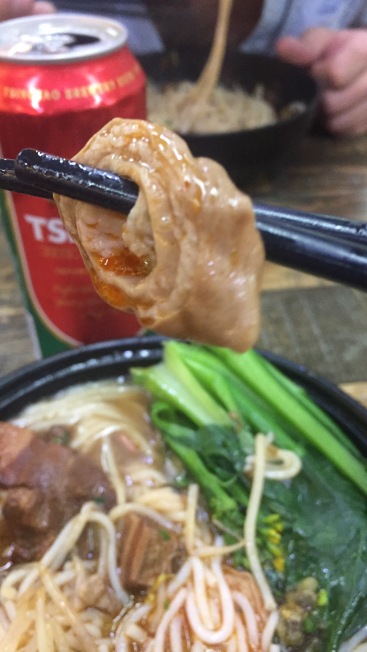 The Hong Kongers don’t really go in for bars the way I know them. They like to drink beer in restaurants, or cocktails in uber-fancy dens hidden inside office buildings. So when you find a good old fashioned dive, you make the most of it. This joint was packed with smiley locals, getting hammered and playing indecipherable bar games. Shortly after we took our seats at the bar, an unconscious patron was dragged past us. My kind of place. We chatted with some friendly folk and downed a few aperitifs, before stumbling back out to find the restaurant on which we’d settled. A big bowl of steaming spicy broth, with some noodles, meat, and veggies, slurped down in an over-lit, crowded, humid, family-run joint, with nothing but open doors and giant fans to combat the intense heat, may be one of my favourite experiences ever; and throughout Asia you can replicate it over and over. This place had marinated pig intestines in at least half their menu items, so I figured that was the way to go. Bloody good it was too.

After Cantopopping our way through the last show, most of the band headed back to NY, but Dan and I decided to hang out for a couple of days. I really needed to unwind after the several notes I’d played that week. We stayed in a part of town which I believe is called Dried Seafood Street, or if it’s not, should be. I spent the days gaping at displays of desiccated denizens of the deep, and nights drowning in noodles and beer. It was a brilliant way to tie off another visit to one of my favourite towns, before hopping it over to Vietnam. About which I’ll tell you next time. Righto.