I was doing so well. A news-free world. I was oblivious to all but what was happening right in front of me. The childish bellowing of politicians, talking heads, and celebrities which make us all dumber and angrier had been silenced. Instead of opening my news apps first thing in the afternoon, I was scrolling Instagram looking at wholesome videos of bearded men cooking steaks beside a river… And then the Coronavirus came along.

Like people from all walks, musicians are being greatly affected by this thing. I have a tour of Italy booked for April which, as if Schroedinger was my travel agent, is simultaneously happening and not happening. It hasn’t been canceled, but taking place mostly in Italy, it surely has. But in monitoring the hysteria almost hourly, I’ve been sucked in to it.

I’ve noticed the marauding bug comes up in every conversation, and I make no effort to change the subject, delighting in telling people of my precarious situation (nobody cares). I greet acquaintances with an elaborate curtsy instead of a handshake; I’m mentally designing a face-mask with a mouthpiece hole cut into it; agonizing over whether to order hazmat suits in pinstripe or windowpane; I’m stockpiling black truffles and Barolo in case supply lines are cut… In short, I’ve given in to the madness.

As of yesterday, all bars in NYC have been ordered to shut down, which means my other job of herding cats in and out of Smalls Jazz Club is on extended hiatus. A very sad turn of events, but considering basement bars in our fair city are generally humid, poorly-ventilated incubators, it’s hardly surprising- it’s a swirling mass of world-traveling, close-talking, drinking, smoking, coughing, rarely-washed humanity down there. A petri dish. It’s brilliant.

I wonder, as a horn player, if I could be considered a “super-spreader.” When we get fired up (and sorry if this is a tad graphic), it’s not just notes we’re spraying around up there. Those front few rows should be provided with some type of weatherproof poncho- it’s not a pretty business. But maybe infection of this kind depends on the fertility of the music being played- listen to a musician play with enough heart and soul, and don’t be surprised if you get a bit of lung in there. In times of pandemic pandemonium, it might be safer to seek out a more hygienic musician: a more aseptic, anemic style of player. I can suggest several…

Gnawing uneasiness caused by hysteria and fear-mongering drove me to the kitchen. Harrowing times like these demand the steadfast solidity of cast iron and beans and ham hocks. If I had access to an open fire and a beard I would have utilized those too. Hempton’s pot of beans gets its enveloping earthy warmth from a variety of Mexican chilies- some hot, some not- found huddling up the back of my increasingly bland and expensive supermarket. They’re keeping their heads down, working hard to feed us despite the creeping gentrification. Guajillo, Ancho, Pasillo: go find them. Drink-wise, one silver lining to the Coronavirus cumulonimbus is that it has apparently stemmed our desire for Corona beer- amazing that it took a simple misunderstanding for people to stop buying that awful yellow muck. Anyway, forget beer- smoky, porky bean stew deserves red wine and so do you. And Gene Ammons on the Hi-Fi. More soon… 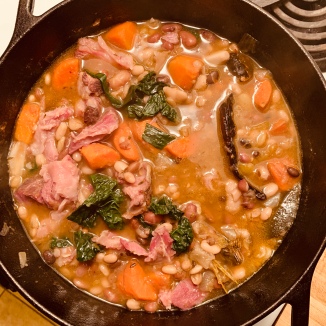 Soften chunks of carrot, onion, whole garlic cloves in olive oil in a cast iron crock pot. Add a whole smoked ham hock (a big chunk of salt pork or bacon would do), soaked dried beans (probably any kind will do- I buy a mix), chicken stock (water in a pinch), fresh thyme, bay leaves, a mix of dried chillies, and simmer for a couple of hours until the beans are the way you like them, and the pork is falling off the bone. Add a couple of handfuls of kale for the last 5 minutes or so. Season and fish out the chillies, bay leaves, and thyme stalks if you can find them. Take the hock out, strip the meat off and slide the meat back in. Serve with bread or cornbread and a muscular vino.

8 thoughts on “Hysteria, Pandemonium, and a Cast-Iron Solution”