If you ever get the opportunity to shuck your own oysters, and you don’t take it, your poor beleaguered soul may never forgive you (if you don’t have a poor beleaguered soul, you can skip to the next paragraph). Especially if those oysters have just been hauled from the very bay beside which you’re sitting, in glorious late-summer sunshine, the sea breeze in your hair, and a cold beer at your side. To hold that gnarly, mud-encrusted shell in hand, and coax the hinge apart with your stubby little knife blade; the muscular resistance as the little guy fights with all his strength to keep you out, until he finally 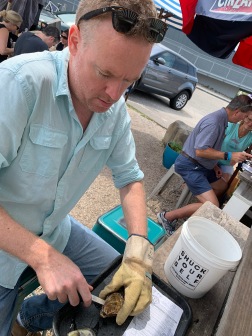 gives it up. The two halves creak apart and the battle is over. If you’re like me, by this point you’ve got half a dozen stab wounds in your hand, but the pain is forgotten as the juicy little beauty and his attendant liquor slide down your gullet. Messy and primal, with that minerally brine running down your chin, spattering your clothes, it’s almost obscene. After a three hour ride from Manhattan, the Hampton Jitney has disgorged you, blinking and disoriented; the bay in front of you, the fishing boats, the seagulls; you can walk straight onto the ferry, but to me a couple of dozen mixed, unshucked from Little Creek Oysters in Greenport is the start of any trip to Shelter Island.

The ferry across the Peconic Bay is possibly the only public transport experience I wish would last longer (I once took a train through the Swiss Alps that I hoped would never end, but then we were halted by track work and rudely dumped onto a bus that piped yodeling music all the way to Zurich. That was freaking interminable). It’s about seven minutes of rolling calm; the salty breeze blowing the jazz club right off me; the only sounds the rumble of the ferry engine, the gentle swell lapping again the sides, and the swearing as another seagull shits on my shoulder. If you’re lucky you might run into Dennis- the island’s jazz bass playing ferry captain. If progress seems a little erratic, it’s because Dennis sees nautical charts as a framework over which to improvise. You’ll know it’s him driving because he’ll get lost at the bridge and end up in the wrong quay. 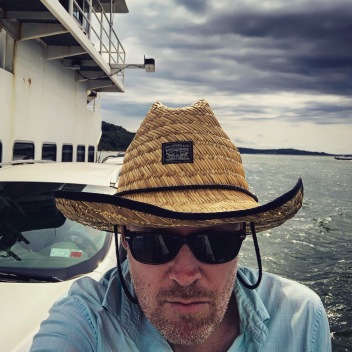 The first Europeans “bought” Shelter Island from the local Manhanset tribe in 1630-something, only about 10 years after NYC was settled, so it’s been on the maps for a while. It was bought and sold and married into and out of by English and Dutch blokes- mostly sugar merchants and plantation owners. In 1651, the Sylvester Family, whose descendants still run an organic farm on the family plot, bought the island for 1600 lb of sugar– an event you’ll be forced to remember should you order one of the specialty cocktails at the awful Sunset Beach Hotel.

Jump forward a few hundred years and some legend opens up the Pridwin Hotel. It’s a beautiful all-wood affair, from the days of Gatsby-style high society, with rolling lawns and tennis courts; and is clearly designed for nothing more strenuous than lolling on the verandah with a G & T, and watching the Osprey fishing in the bay (Here’s an amazing video of an Osprey in Scotland. They’re so cool.) C and I come here 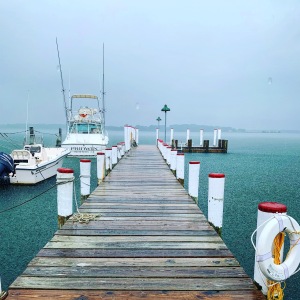 every year to play a few sets of dinner music; and to eat, drink, dive off jetties, swan about with cocktails, and generally live in the extravagant, grandiose manner to which we’d dearly love to become accustomed.

Most of the Pridwin’s menu- tuna, bass, flounder, swordfish- is dragged struggling from the surrounding waters by the hotel’s own fishing boat. I fantasize about joining them on an expedition but I know my complete lack of knowledge and ability would be somewhat of a hindrance, and I’d make a massive fool of myself. I’d get a lure stuck up my nose, or panic and throw all the rods in the water, or be discovered crouched in the back of the boat, blood-smeared and sheepish, having eaten all the bait. I’d be a floating liability. I’ll never be a fisherman but that doesn’t stop me sitting on the jetty in an old sweater, smoking a pipe, telling the youngsters about the whale who took my leg. I’m quite a character.

Entertainment on Shelter Island is weighted towards outdoorsy, watery pursuits; and while you can find the occasional play or concert (violinist Itzak Perlman has a music camp next to the Pridwin; nobody ever goes in, and nobody ever comes out…), you don’t visit for the high culture. You can, however, choose to spend a bright sunny day in the crepuscular hush of one of the loveliest bookstores anywhere. An heroically independent oasis, Black Cat Books seems to specialize in art and design books, but there are shelf-loads of used novels, poetry, and music to keep you occupied and out of the murderous sunshine for hours. Walk through their doors and experience a sense of relief known only to the nerd who finds a bookshop at the beach. During summer it’s open every day; the rest of the year, “by chance”. 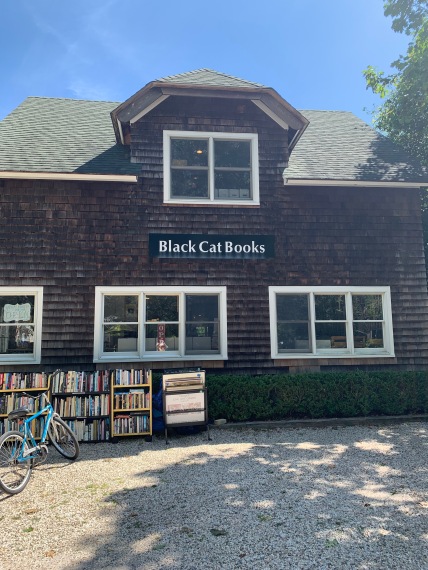 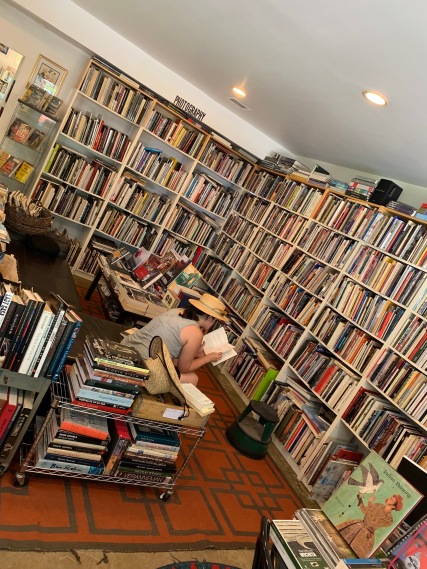 One afternoon C and I embarked on a ludicrously over-ambitious bike ride to Ram Island (actually a peninsula, and not especially ovine). 5½ miles of hills. Steep, exhausting, enthusiasm-sapping hills. Somehow we started at sea level, rode continuously uphill for an hour or two, and ended up at sea level. I don’t understand it, and I don’t know what we were thinking. I’m just thankful I followed the lead of professional cyclists, and took a load of drugs before we set off. The only thing keeping us pedaling was the thought of a cold beverage at the Ram’s Head Inn- another lovely 100-year old pile, sort of bookends with our own Pridwin. We collapsed in puddles in their cool, empty bar, and as we greedily poured drinks into ourselves, C noticed a plaque on the wall. It memorialized the “Shelter Island Conference”, a 1947 meeting of Nobel Prize winning physicists (Oppenheimer being the only one I’d heard of), who spent three days discussing quantum mechanics and atomic weaponry in what is now known as “a landmark event in the history of postwar American physics.” Our own bar chat -How about those hills? and -Golly my legs are tired! suddenly didn’t seem quite as profound or insightful as we thought, so we toasted the Atomic Bomb, finished our drinks, and pushed off.

I should warn you of the downside to a trip to Shelter Island: the reentry. Stepping off the return bus at rush hour in midtown Manhattan, the sea of hard faces, the gritty, stifling air, the chaos of horns and sirens, it’s a rough landing. I close my eyes and imagine I can still hear the gulls and the ferry engine, smell the sunscreen and salt, feel the jolting stab of the oyster knife in my hand, until I can get to the nearest fish market and take home a dozen Peconic Golds, unshucked.