I’m glad this thing is finally launched, and I can start talking about it: the set up has been much more involved than I expected, and I’ve had nobody to complain to! (Actually one person, but she reached breaking point some time ago…)

Seems pretty simple, right? Record a tune, put it online, repeat. Oh yeah? Really?! How dare you diminish the magnitude of my efforts!!? Sorry. Sorry. I’m a little high-strung at the moment. Anyway, here’s what’s gone down so far:

The recording itself should be a fairly simple procedure. I went down to Smalls Jazz Club with our engineer Andrew the other day to familiarize ourselves with the equipment. He seemed to understand it all- I was practising microphone-stand tricks most of the time, but I nodded gravely at some knobs and sliders. The band’s booked, the tune’s being written- this should be the fun part.

Getting the music online and available has been tricky. I’ve chosen wordpress as the host of this blog, because it’s simple and looks good, and the cool kids seem to hang out here. But you can’t sell music directly from the blog. So I need a third party. The popular choice for independent musicians is CDBaby- they’re great, but they don’t work on wordpress. They’re still handling distribution to iTunes, Amazon, etc, but for the blog I need a fourth party. Enter Bandcamp. Not ideal, because they take a relatively large cut, but after some widget jiggling, I’ve got them to play nicely with the blog, so they’re in. Lucky, cos I’m partied out, man.

Looking for that last little bit of infuriating aggravation to push you over the edge? Give Paypal a call! If you haven’t used it before, Paypal is a fairly simple way of receiving payment for goods sold online. Their standard fee works fine if you’re selling ironic Tshirts to hipsters for $30, but for $1 music downloads, they’ll take almost a third. So you have to call them and set up “micro payments” and evidently I’m the first person who’s ever done it. I’ll say this for Paypal phone staff- they’ve mastered the mystified silence. Countless emails, calls and redirections later, I think I’m set up, but nobody is really sure. 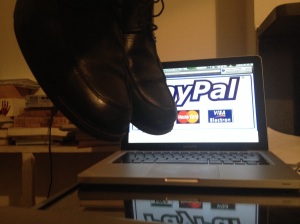 (In case you’re interested, per download sold through this blog, I now pay 5% + 5c to Paypal, and 15% to Bandcamp, or 25% total. iTunes and Amazon take considerably more.)

Other preparations: Thought of, and rejected, the following titles for the project: Swinging Singles, Like-minded Singles, Rolling News, Drip Feed, A Rational Caper, etc. Rough, I know, and these are the best of the lot; spent much too long writing a press release outlining the project, and mailed it out to about 200 press and radio folks. Response so far: lukewarm. (Most of that release is now on the “About” page); bought a plastic robotic goldfish from Target and went to Brooklyn to have my photo taken with it. Respect to photographer Yuki for acting like that was ok; had artwork designed for our various platforms (Facebook, youtube etc.), which reminded me of the old aphorism about it being easier for a camel to go through the eye of a needle, than for your artwork to fit the template of Youtube; practised crossing fingers- challenging while playing the saxophone, but this thing needs all the help it can get!

So this is where we are now. A nice shiny blog, preparations in place for distributing the music, word out to the press, and a swinging first tune on the way, which I’ll tell you all about next week. Righto, that’s it for now. Cheers, Nick

3 thoughts on “You want some cheese with that whine?!”