It’s about 30 minutes before showtime at An Unnamed Jazz Club in Jakarta, Indonesia. I’m sitting in the green room, but I can hear the pleasant buzz of a jazz club rolling into action. Customers chatter as they’re led to their tables, waiters deliver drinks, bartenders mix cocktails and ignore thirsty musicians, the PA plays something that’s probably jazz but isn’t quite loud enough to hear. Then a mechanical whirring sound coming from the stage prompts me to poke my head out for a closer look. A giant screen is being lowered behind the stage. I can’t really envision a situation in which this is a good thing.

In my younger days in Australia, a big screen behind the stage meant there was a football game on and we were expected to stand and play in front of it, obstructing the patrons’ view, and cementing their already deeply held hatred of jazz and jazz musicians. But this was a fancy joint- surely we could expect something appropriate… maybe video of a classic live jazz performance to get folks in the mood? Perhaps images of jazz greats accompanied by something swinging and understated? How about a stadium rock show featuring wailing guitars, pounding drums, and a posturing frontman, with audio pumped up to 11? It’s going to be that last one, isn’t it. The club was suddenly transformed into Wembley Stadium as Freddie Mercury prowled the stage and promised to rock us. Now I dig Queen, but there’s a time and place- we’re trying to create an atmosphere here… I took my displeasure to the manager who explained that the owner’s son was on his way to the club. He’d called from the car to say he expected to arrive to Queen. He wanted “Hammer to Fall” on his entrance. Sometimes things look the same around the world, but the differences are lurking just below the surface. I threw my hands in the air and grumbled my way back to the greenroom. In the end the show went fine, the hyped-up Jakarta audience showing their appreciation for serious jazz by bouncing a beachball around the club and hoisting topless women on their shoulders.

15 floors up from this debacle was the Hempton Suite. I’d negotiated a hotel room in this 5-star pile as part of my hilarious remuneration package; it was my first 5-star experience and I was making the most of it. Holding imaginary business meetings in my “office;” allowing the pool attendant to dry me with an actual living chamois; reclining theatrically, Pimms in hand, on my daybed; phoning my imaginary agent from the bathtub; and finally getting to know the intricacies of the Toto Washlet electronic commode. Let me tell you- once you’ve Toto’d, it’s hard to go back. A perfectly warmed seat, startlingly accurate water jets streaming from all directions, and a puff of warm air all leave you floating on a cloud of dazed satisfaction.  I can’t be sure, but as I left the room, I could’ve sworn it whispered “good boy.” Anyway, I’m starting a crowdfunding campaign so I can afford a Toto Washlet of my own. I think it’s a worthy cause, and no more a vanity project than most other crowdfunded endeavours. 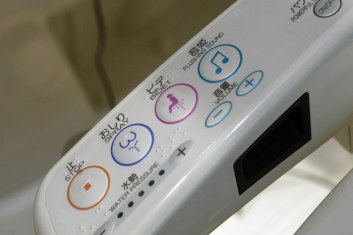 The secret to enjoying a fancy hotel in Jakarta is conveniently forgetting the appalling poverty right outside your window. I took a stroll to a nearby market, thinking I’d get the feel of the place, maybe take some photos, and eat something tasty. I soon realized t’s not like other places. When you hit the streets in China, the locals might glance at you curiously. In Thailand they smile at you. In Vietnam, they ignore you. In Jakarta, as soon as I left the hotel’s manicured grounds, I was on narrow dirt roads, hopping daintily over piles of trash and dead rats, thoughts of street food tripping over each other to get out of my brain. The markets were the expected industrious hubbub, but the people would stop what they were doing to stare vacantly at me as I passed. I took a few photos then stuffed my phone in my pocket when I realized that not a single person had a phone in their hand. How they maintain any sort of Social Media presence is beyond me.

The problem was, I was pathetically under-prepared for a visit to Jakarta. It was only three nights so I hadn’t bothered researching where to go or how to get there. On my night off I managed to get a cab to take me to a nearby restaurant specializing in fried duck, which seems to be somewhat of a local delicacy. As I strolled in, the staff froze and gave me the stare, before huddling up for a heated discussion, seemingly deciding whether to serve me or not. I guess I passed inspection, and was presented with an indecipherable menu. My helpless jabbing was soon rewarded with a hunk of fried duck, white rice, a pile of fresh herbs, and a pot of fiery, salty, eyeball-melting sambal, all served on a banana leaf. I turned to point out that they’d forgotten to give me utensils, when I noticed my neighbours in up to their wrists. I jumped in with eager fingers and made a right mess of it- it’s harder than it looks. Now I love to have a stab at the local customs but I’m sorry- you’re aware of the invention of the spoon and you’re going to persist in eating rice with your fingers? I think you’re just being obstinate at this point. Anyway, it was delicious, and next time I’ll do my research and have more food stories for you. 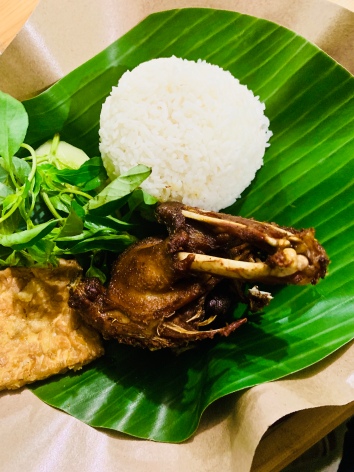 For now, until that kickstarter campaign comes through, I’ve constructed my own Toto Washlet out of a length of old garden hose and a portable fan heater, so I’m off to try it out! More soon…

(Dig this? Enter your email address top right, and you’ll get the next one right in the inbox!)

3 thoughts on “Stadium Rock, Topless Women, and Some Potty Talk: 3 Days in Jakarta”