Note: the word “now” in the first sentence refers to a time about two weeks ago. Pretend I posted this then, and you’re just reading it now. I know, you’ve been busy…

I’m writing to you now (that was it) on a Cathay Pacific flight from Hong Kong to New York. They’ve got a good selection of British telly onboard, and I’ve just watched two hours of Cockney sitcoms to aid in the  digestion of whatever it was I just ate, so I apologise if things go a bit how’s-your-father, if you know what I mean. I’ve just spent a couple of weeks in my home town of Sydney. It’s been twelve years since I lived there, and three since I last visited. It’s an odd feeling to go back after all this time: it all feels equally foreign and familiar. Like that guy from Fantasy Island. Ricardo Montalban. Not Hervé Villechaize. He’s more Adelaide. Don’t worry- this won’t be on the test. Anyways, let’s start at the beginning.

The first thing that happens when you land in Sydney- if you’re me- is that your Australian accent comes back. Like, immediately. In my time in the US, I’ve developed a weird hybrid accent which, while saving me from having to repeat myself to cloth-eared locals, makes me the target of much scorn from visiting Aussies. But here I was, talking like a local again before I’d even collected my carry-sacks from the trundle-round. Next time you visit, try addressing your friendly immigration officer as an old c#nt- you’ll fit right in! I was staying at the home of my handsome and generous younger brother in the charming suburb of Leichhardt, named in memory of a fellow of the same name, who did something memorable. I spent many of my younger days in this area, and I was keen to revisit some of the old haunts. 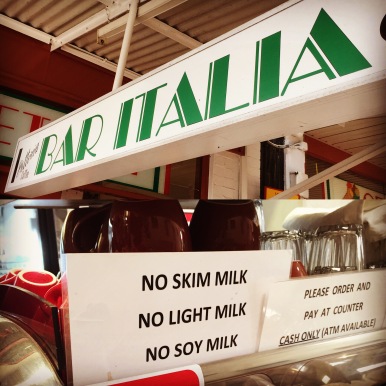 Leichhardt is Sydney’s Little Italy. It’s not overtly Italian, like New York’s cartoonish Mulberry Street, but instead it’s spread-out and residential, and lots of old people still speak Italian. If you hang out in the wrong places, you might run into the occasional “colourful racing identity”, but it’s more about old women dressed in black with sons who still live at home. I have to stop in at Bar Italia, which actually can get a bit fuhgeddaboudit, but I’ve been going there since I was a teenager, and it hasn’t changed. The food and coffee are decent, but go there for the Italian-Australian atmosphere. 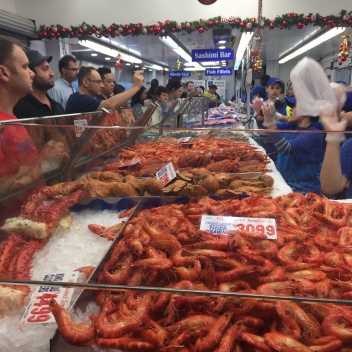 Christmas in Australia is hot. It’s just one of the things we obstinately insist on doing differently. We also sleep under our beds, comb our hair with forks, and wear socks over our flip-flops. There are a few old-timers who persist with the big traditional hot Christmas dinner, but most of us realise it’s more seasonally appropriate to spend the day shovelling the contents of the Pacific ocean into our gobs. And if you’re in Sydney, this means a visit to the Fish Markets. It’s been a while, so I’d forgotten that this is the greatest place on earth. 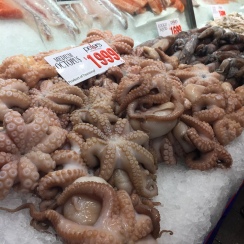 It’s a big, wet, sprawling, chaotic affair, with dozens of burly vendors selling every animal that’s ever set fin in an ocean. They stay open ‘round the clock for a couple of days before Christmas to deal with demand, but it’s still insane at 3AM. I like to leave my bro to do the purchasing while I wander around inspecting the freshness of giant grouper by examining their teeth. I wish there was another way. 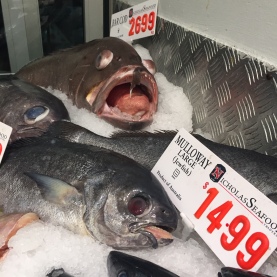 There’s not much to do between Christmas and new year. Everything is closed except the pubs; and when you’ve been in town three days, and the bar staff know more about you than your family does, you’ve been spending too much time there. Anyway, this week is for Australians to lie on the couch, watch the cricket, and digest, like a snake that’s just eaten a whole goat. And then slid onto a couch to watch cricket.

Then New Years Eve rolled around as it so often does, and for the big night I was thrilled to be playing with some old chums in a Ska band called Backy Skank. I’m proud to say I was a founding member of this band 20-something years ago, and reuniting is always a gas. 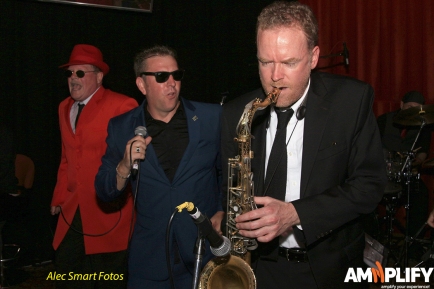 The venue was Lazybones lounge- a two story warehouse-style joint, run by a charming madman called Craig. We think Craig sleeps there. Backy Skank frontman Pete described the decor as “part Chinese brothel, part English gentlemen’s club; although I’ve never been to an English gentlemen’s club.” Dozens of vintage Chesterfield sofas for napping, bizarre nicknacks on every surface, pornographic paintings on the ceilings, and a general attitude of louche abandon- this is where you want to spend New Years Eve. We skanked it up for a few hours, playing hits from Madness, the Specials, a bit of Marley; while downstairs, I was chuffed to discover my mates Dan Barnett, Dave Blenkhorn and James Ryan playing jazz! Upstairs for beer and ska, then downstairs on the breaks for whiskey and jazz! A fabulous night. Then I turned fucking 40.

Next up, Sydney, week 2: fun, swinging Aussie jazz gigs, and the onset of resentful middle-aged bitterness!